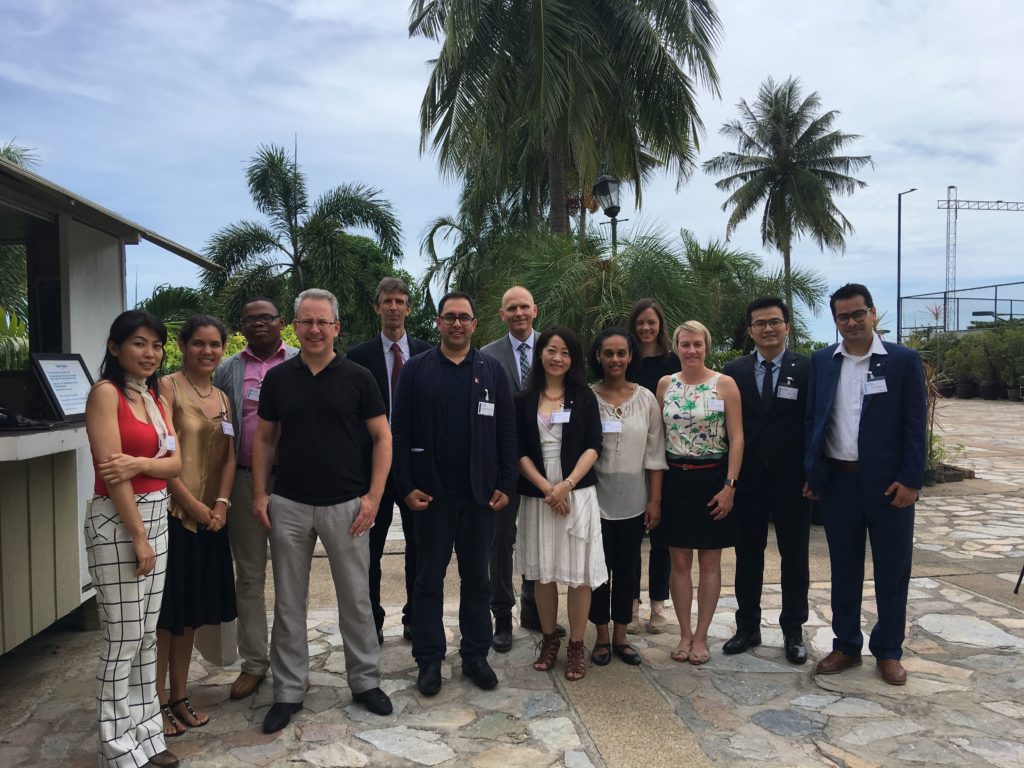 This group is the voice of prominent young researchers from all over the world in discussions about global health policies (in relation to clinical medicine, public health, environmental health and social studies of health and illness).

The group covers selected important problems of human health through preparing GYA statements (i.e. position or commentary papers in scientific journals) and representing GYA in forums and meetings on the subject. The statements or opinions concern either problems identified by the group or issues already debated by other relevant bodies e.g., WHO, G20 or the European Commission. The group will present voices of young scientists in the meetings and conferences such as Global Health Summit, World Health Assembly, UNFCCC conference of parties meetings and negotiations on climate change to address health etc.

The group continue to act as organisers for a New Voices in Global Health session at the World Health Summits, for which they bring together members of the GYA and from other (national) young academies. A call for the 2023 session will follow April/May 2023.

Members of the group have started a 1-year project on Antimicrobial Stewardship, to look into coordinated programmes that promote the appropriate use of antimicrobials (including antibiotics), improve patient outcomes, reduce microbial resistance, and decrease the spread of infections caused by multidrug-resistant organisms. The current COVID-19 pandemic is showing once more that enough has been said but little is being done about increasing antimicrobial resistance.

Members of the group are also part of the 2020/21 Sasha Kagansky Interdisciplinary Grant on “The COVID-19 pandemic and art”.

Group members Pradeep Kumar (University of the Witwatersrand, South Africa), Karen Cloete (University of South Africa) and Stefan Kohler (Heidelberg University, Germany) co-chaired a New Voices in Global Health session at the World Health Summit 2022 in Berlin. In particular, the session theme was “Covid-19 and Antimicrobial Resistance: Connections and Consequences”. Read a full article about this colaboration between the World Health Summit and the GYA here.

In October, group member Shymaa Enany  attended the Dr A P J Abdul Kalam Advance Science lecture series in Hemchandracharya North Gujarat
University, Patan, India as a keynote speaker. She gave a talk about how networking can be beneficial for early career ressearchers as well as how interdisciplinary networking through the GYA opened gates and empowered her as a researcher.

Furthermore, Global Health group member Suraj Bhattarai attended the International Conference of Urban Health 2022 in Valencia,  representing the GYA. He had supported the planning of this conference beforehand, and during the meetings highlighted the GYA’s role in advancing the Urban Health agenda. Read the full report here.

Group members and members of National Young Academies again organised and contributed to a New Voices in Global Health session about “COVID-19 vaccination rollout: opportunities and challenges” at the hybrid World Health Summit in Berlin, Germany, in October 2021.

Group members and members of National Young Academies organised and contributing to a New Voices in Global Health session about “Perspectives and responses of young scientists to the coronavirus pandemic” at the digital World Health Summit in Berlin, Germany, in October 2020. See here for more details.

In April, group member Suraj Bhattarai (Nepal) was a speaker in a webinar on Covid-19 and Maternal Health, organised by the Action against Stunting.

The group published a promotional video of their work, filmed by Nerina Finetto/ Traces.Dreams​.

Group co-lead Meghnath Dhimal (Nepal) co-authored a paper titled ‘Rising rural body-mass index is the main driver of the global obesity epidemic in adults’ that was published in Nature. A shareable link for the paper is here, and visualisations of the paper’s results are available here.

Two members of the group, Sandra Lopez Verges and  Daniel Limonta, participated in the second CILAC Forum (Latin America and Caribbean Open Science Forum) in Panama on 22-24 October 2018. They also attended a Scientific Leadership Workshop “Young scientists leading the change to 2030” sponsored by IAP, TWAS and GYA in Panama City in October 2018 as a pre-event of CILAC 2018.

The working group member Sandra López Verges also participated in another pre-CILAC workshop on Science Diplomacy organised by SENACYT (Secretaría Nacional de Ciencia, Tecnología e Innovación) from Panama, American Association for the Advancement of Science (AAAS), Inter-American Institute (IAI) and UNESCO. This workshop aimed to give an introduction to researchers, diplomats and decision-makers of the Latin American region and to explain how to use science diplomacy as a tool to work on the SDGs together at the regional level. Sandra gave a talk on science diplomacy agreements that allowed collaborative work for preparedness on emergent and reemergent pathogens that allowed a rapid response during the recent Chikungunya and Zika introduction to the Americas.

Working group lead Meghnath Dhimal (Nepal) participated in the Fifth Global Symposium on Health Systems Research in Liverpool, UK, in October 2018. The theme of the Symposium was  “Health Systems for All in the SDG Era”  which encapsulated the spirit of these commitments and brings them forward into current debates and actions on the SDGs, and especially, Universal Health Coverage (UHC). The symposium was attended by over 2,000 delegates from 146 countries, including Health Policy and Systems Reasearch scholars, practitioners, funders, policy actors, community activists and the media. Over half of the attendees were from LMIC settings, and representative of all regions of the world.  The Symposium was focused on four major sub-themes: multisectoral action, community health systems, engaging the private sector, and leaving no one behind which helped advance conversations and commitments to stronger and more resilient health systems.

Group lead Meghnath Dhimal (Nepal) gave a talk on climate change and NCDs at the Fourth National Global Health Programme 2018 which was organized in August 2018 at the National Centre for Health Professional Education, Institute of Medicine, Maharajgunj, Kathmandu, Nepal.

Group member Daniel Limonta (Cuba) participated in a workshop on the UN SDGs, organised by the Interacademy Partnership (IAP) and the Inter-American Network of Academies of Sciences (IANAS), in Mexico in May 2018.

Group member Meghnath Dhimal (Nepal) attended the Prince Mahidol Award Conference 2018 in Bangkok, Thailand from 29 January to 3 February 2018. As a panellist for the session on ‘Climate Change and Emerging Diseases: The Importance of Resilient Societies’, Meghnath gave a talk about the increasing risks of emerging vector-borne diseases in the Hindu-Kush Himalayan region due to climate change.

Meghnath also co-organised the Fourth National Summit of Health and Population Scientists with the theme of ‘Advancing Evidence on Changing Health Systems in Nepal’ in Nepal in April 2018. He presented a paper on Climate change, global health and funding opportunities to low and middle income countries. The summit was attended by more than 1200 participants, mostly young scientists. It provided a platform to discuss health research agenda among researchers, policymakers and external development partners.

In July 2018, the group published a promotional video of their work, filmed by Nerina Finetto/ Traces.Dreams​.

He was also involved in an international seminar on ‘Accelerating Sustainable Development Goals progress for Health, Nutrition and Environment’ at the Nepal Academy of Science and Technology (NAST), Kathmandu, Nepal, in November 2017.