The GYA as an academy, as well as our members and alumni, work with a number of partner organisations to contribute the voice of early- to mid-career researchers and scientists to solving global challenges. Please see below for an ever-growing list of our esteemed partners and funders.

The GYA is still building this page, and will add to it as our partnerships continue to grow. Please contact us at with any questions you may have.


The Global Young Academy gratefully acknowledges the core funding from the German Federal Ministry of Education and Research.

The GYA and The All European Academies (ALLEA) launched a strategic partnership in early 2019, formalised in a Memorandum of Understanding between the two organizations. ALLEA, as the European Federation of Academies of Sciences and Humanities, represents more than 50 academies from over 40 countries in Europe. Together, the GYA and ALLEA aim to enhance knowledge exchange and establish a set of joint activities on topics of mutual interest at the interface between science, society and policy.

In 2019, the GYA became a full member of the InterAcademy Partnership (IAP), a global network of 138 academies of science, engineering and medicine. The IAP is a vital part of the global science landscape, and strives to ensure that science serves society inclusively and equitably. IAP support for the GYA and National Young Academies goes back well beyond the founding of the GYA in 2010, to IAP’s support for young scientists at the “Summer Davos” meetings  of the World Economic Forum’s Annual Meeting of New Champions in 2008 and 2009.

Since April 2020, the GYA has been an Affiliate Member of the International Science Council (ISC). The ISC brings together the natural and social sciences through over 170 international scientific unions and associations, as well as national and regional scientific organisations, including academies and research councils. As global science organisations, both the GYA and the ISC seek to advance science as a global public good.

The European Academies Science Advisory Council (EASAC) represents the European National Academies of Science of EU Member States, Norway, Switzerland and the UK, to advise the EU with up-to-date scientific evidence on pressing issues. The GYA collaborates with EASAC in the European context, with shared partners such as the European Commission’s Joint Research Centre or the InterAcademy Partnership.

The GYA is part of a consortium, led by the Open Research publisher F1000 Research, that promotes the European Commission’s own free Open Access publishing platform for scientific articles Open Research Europe (ORE). The platform is a peer-reviewed publishing service to support beneficiaries of Horizon 2020 and Horizon Europe to meet the European Union Open Access requirements.

Future Earth is a global network of scientists, researchers, and innovators collaborating for a more sustainable planet. The GYA is represented in Future Earth’s Early Career Researchers Network of Networks.

The German Academic Exchange Service (DAAD; Deutscher Akademischer Austauschdienst) supports the international exchange of students and researchers by funding projects, granting scholarships and supporting higher education with international exchange. The GYA and DAAD, together with the Alexander von Humboldt Foundation, co-organised a workshop in 2019 to expand the network between the three organisations.

The Global Research Council (GRC) comprises the heads of science and engineering funding agencies from around the world, dedicated to promoting the sharing of data and best practices for high-quality collaboration among funding agencies worldwide. After an earlier cooperation in 2015/16, in 2018 the GYA was again invited to nominate members to the regional and the following global meeting in May 2019.

The key goal of the International Network for Government Science Advice (INGSA) is to build capacity to give advice, but not provide advice itself. Therefore, the partnership between INGSA and the GYA is focused on INGSA’s training activities as they relate to the GYA’s early-career researchers. A highlight of this cooperation was the one-day science advice workshop prior to the opening of the GYA Annual General Meeting and International Conference of Young Scientists in April 2019.

The European Commission’s Joint Research Centre (JRC) and the GYA established their partnership with a letter of intent in 2015. The JRC takes up the role of a science and knowledge service of the European Commission by employing scientists to give advice and support the European Union. Together, the JRC and the GYA are working on the topics of science advice and at-risk scholars. In line with this, collaboration has focused on the support of refugee scholars and has included the development of a training and mentoring workshop for at-risk and refugee scholars. A series of summer schools on science advice have also been organised, sometimes including the International Network for Government Science Advice (INGSA).

The GYA is one of the academic partners of the Lindau Laureate Meetings and nominates participants for their annual meetings. As Lindau focuses on age groups below 35, the GYA’s ability to nominate its own members is rather small. The GYA extends its call to younger scientists, even PhD students, nominated by its members and alumni. In 2019, three GYA nominees were selected by Lindau to take part in the 69th Lindau Nobel Laureate Meeting, dedicated to physics.

The aim of the National Science and Technology Development Agency (NSTDA) of Thailand is to accelerate science, technology and innovation development in Thailand to enhance the country’s competitiveness in the global economy and thereby contribute to the national economic and social development. The NSTDA has supported notable GYA activities, particularly in connection with supporting the situation and networks of Early-Career Researchers in ASEAN.

National Young Academies (NYAs) bring together young scientists for the advancement of issues important to young scientists in their national and regional setting. The GYA acts as a facilitator of the growing global network of the NYAs, as well as a supporter for the establishment of new NYAs, joint projects and meetings. 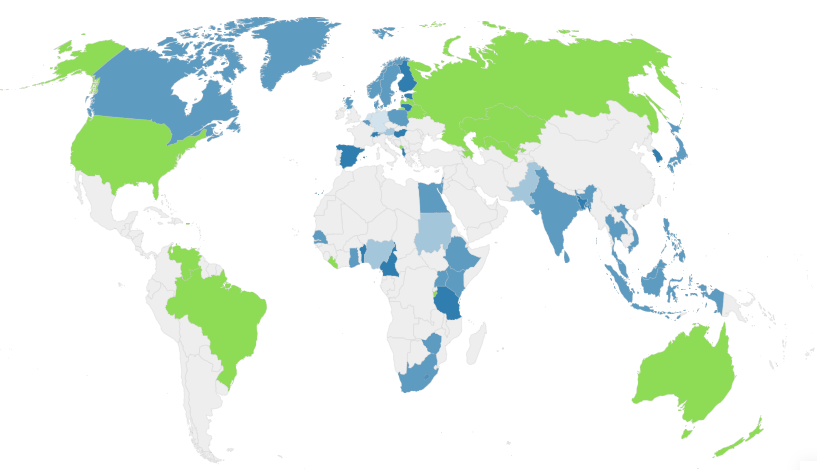 Recognizing that research has a major impact on the development of society, the National Institute for Science Communication (NaWik; Nationales Institut für Wissenschaftskommunikation), Germany, offers information and training on how to produce and deliver science communication which is easily comprehensible to a wider public. The GYA Working Group Trust in (Young) Scientists collaborates with NaWik.

The Organization for Women in Science for the Developing World (OWSD) is a programme unit of UNESCO, which connects women scientists from the developing and the developed world to strengthen their role in the development process and promote their representation in scientific and technological leadership. OWSD and the GYA through its Women in Science working group in particular share a common interest in promoting diversity and equality in science.

The GYA enjoys a longstanding partnership with The World Academy of Sciences (TWAS) and the two organisations cooperate whenever a joint interest is identified. GYA members are regularly taking part in TWAS projects. In 2019, GYA members were involved as speakers in two TWAS regional workshops and collaborated on the development of a regional research project in the LAC region, which is one of the main interest regions of TWAS.

The TWAS Young Affiliates Network (TYAN) comprises 125 outstanding young scientists in various regions of the developing world. The GYA and TYAN share a common interest in promoting and connecting early career researchers worldwide. This is also reflected by the fact that some GYA members are also TWAS Young Affiliates. Presently, the two organizations see potential for cooperation with regard to a study on the Global State of Young Scientists in Latin America and the Carribean (GloSYS LAC) and a Science Leadership Programme in the same region.

The United Nations Major Group Children and Youth (UNMGCY) was created by the UN as a mechanism for younger people to engage in UN processes. The partnership between this group and the GYA started in late 2015, when the GYA was invited to the Advisory Board of the UN Major Group for Children and Youth. With the development of the ISC, the collaboration was strengthened in 2019.

The University of Pretoria (UP) is one of Africa’s top universities and the largest contact university in South Africa. The University of Pretoria and the GYA co-developed the African Science Leadership project, which addresses two central issues that emerged from earlier research into the situation of young scientists: mentoring and support structures, and focused training to increase leadership skills.

The Volkswagen Foundation (Germany) seeks to support young researchers from all disciplines by funding academic institutions and research projects. The Volkswagen Foundation has been one of the main funders of the GYA ever since 2010, and currently supports two GYA working groups with funding for additional projects on DIY Biology, and on Trust in Science.

Wolfson College is one of the University of Oxford’s (UK) largest graduate colleges. In 2019, Wolfson College hosted the Academic Interdisciplinary Research Leadership Workshop set up by the GYA At-Risk Scholars Initiative, which was planned to be repeated in 2020. Due to the COVID-19 pandemic, the meeting has been postponed until 2021.

Since its founding in 2009, the World Health Summit (WHS) has been held annually to connect stakeholders and decision-makers to find solutions to global health challenges and set the agenda for a healthier future. Each year, the GYA is invited to send a certain amount of its members to participate. Since 2019, the GYA Global Health working group is also organising the New Voices in Global Health sessions at the WHS with participants from the GYA as well as from young academies.

The World Science Forum (WSF) is a collaborative summit, which builds a platform for various stakeholders to discuss the role of science, its responsibility towards society and the importance of scientific advice for decision-makers. In 2019, the GYA was invited to join the Steering Committee of the WSF to represent young scientists worldwide.