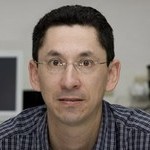 Santiago Ron was born in Quito, Ecuador on October 16, 1970. In June 1995 he obtained the Licenciatura in Biological Sciences from the Pontificia Universidad Cat½ca del Ecuador (PUCE). In 1996 he entered the graduate program at the University of Kansas and obtained a Master of Arts (May 1998). After serving as professor at the School of Biological Sciences of the PUCE for four years, he entered the Ecology, Evolution, & Behavior graduate program at the University of Texas, Austin, in September 2002. He finished his Ph.D. in May 2007 and in September of the same year began an appointment as Aggregate Professor at the School of Biological Sciences of PUCE, in Quito, Ecuador.Dr. Ron's preferences for complex courtship traits. He has examined how sexual selection has interplayed with morphological constrains to shape the evolution of male courtship traits. In the field of conservation, he has studied to global phenomenon of amphibian population declines. He has also studied climate change in the Ecuadorian Andes and how it may have affected frog populations. His research has demonstrated that temperature increase in the Ecuadorian Andes has been significantly higher than the world average. Overall, his research in conservation biology has significantly helped to understand the processes that are responsible for one of the most rapid and pervasive conservation crises experienced by any vertebrate group. This baseline information will assist conservationists and policy makers to delineate action plans to protect amphibians worldwide.