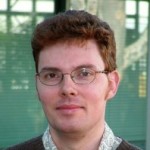 James read physics at Oxford University, graduating in 1994 and completed his DPhil at the same institution in 1997. His DPhil thesis, "Measurement of Proton Structure Functions at Low Q2" was based on work at the ZEUS experiment at the DESY laboratory in Hamburg and looked at the quark structure of the proton, studying the onset of perturbative quantum chromodynamics.In 1998 he moved to Australia to join the CSIRO On-line Analysis and Control group to work on the development of nuclear instrumentation for the minerals and security industries. He specialises in the development of techniques for modelling radiation and using these to invent new ways of solving challenging measurement problems. He currently leads the Security Technologies stream and the Nucleonics research team in CSIRO Minerals.Some of the key projects he has worked on include: inventing a new, 3-dimensional gamma-ray imaging camera concept, building a neutron/gamma-ray analyser for bulk cement analysis, and the development of X-ray analysers for precision, trace-element and mineralogical measurements. With Dr Brian Sowerby, he co-developed the fast-neutron/gamma-ray radiography method for air cargo screening. Following a successful, full-scale demonstration of the technology at Brisbane airport, the Air Cargo scanner is now being commercialised with a major overseas security company.Dr Tickner has received numerous awards for his work including CSIRO medals in 2006 and 2008 and the 2006 Australian Academy of Science Frederick White prize. He has authored 90 publications and patents in the fields of particle physics, computer modelling methods and nuclear instrumentation.