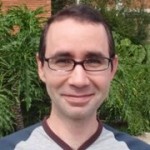 Fernando Febres Cordero is a theoretical physicist, whose research interest is in particle physics phenomenology. He was born in Maracay,Venezuela. He finished at the Simon Bolivar University his undergraduate studies in Physics with highest honors (Summa CumLaude), the first student to be awarded such degree in the history of the University. In 2007 he finished his PhD degree in Physics at theFlorida State University, where he received from the PhysicsDepartment the Dirac-Hellman Award for outstanding contributions to precision hadron collider studies. Between 2007 and 2009 he was aPostdoctoral Researcher at the University of California, Los Angeles.Currently he is an Aggregated Professor at the Simon BolivarUnivesity. Fernando’s work has been centered in the precise study of important signals for the physics programs of colliders like the Tevatron and the LHC. He has made contributions that have allowed the computation of multi-leg and multi-loop amplitudes in Quantum FieldTheories which until recently seemed impossible. This within automated frameworks that should benefit the larger particle physics community. In 2010 Fernando cofounded the Venezuelan Young Scientist Network, a multidisciplinary working group associated to the Venezuelan Academy of Science.