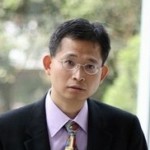 I received the B.A. in Agricultural Economics from National Chung-Hsing University (Taiwan), the M.P.A. from Michigan State University, and the Ph.D. in Public Affairs from Princeton University in 2005. Right after that, I joined the Institute of Political Science, Academia Sinica (Taiwan), as an assistant research fellow, and was promoted to be an associate research fellow in 2011. In the last five years, I have received two awards for my research from TaiwanÕs National Science Council: Wu Da-You Research Award (analogous to the U.S. National Science Foundation’s Young Scientist Award) in 2008 and the Distinguished Research Award in 2011. My research focuses on political economy of legislative institutions and politics in the U.S. Congress and Taiwanese legislature. One of my core research agenda is what causes legislative gridlock in these legislatures. I developed game theoretical models and examined them with data on legislative productivity to identify the key driving force for legislative gridlock. Also, I have worked on several sophisticated theoretical models on filibusters to understand the cause of legislative obstruction. Political methodology is another of my research interests. I have been building a large data bank on roll call votes and legislative proposals to estimate ideological preferences and party influence on party members. In the future, I will not only continue these research agenda but also apply my previous theoretical results to other legislatures, such as the European Parliament.