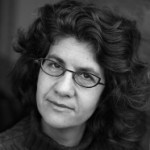 Arianna Betti (1970) studies the relationship between language and the world, focusing in particular on notions such as truth, meaning and reference in 19th- and 20th-century scientific philosophy in Central Europe. She is currently assistant professor in logic, metaphysics and their history at the Vrije Universiteit Amsterdam, where she is the Principal Investigator of the ERC Starting Grant Tarski’s Revolution: Semantics and Axiomatics from Bolzano to Tarski against the background of the Classical Model of Science. She has given sixty-three invited talks in nineteen countries and four continents and is the author of Against Facts, co-editor of two special issues of Synthese (The Classical Model of Science I & II) and of around forty other publications, including an entry on Kazimierz Twardowski in the Stanford Encyclopedia of Philosophy. She has studied in Firenze, Krakow, Salzburg, Graz, and Genoa where she wrote her PhD on time and truth in Bolzano and the Austro-Polish tradition (2001). She is currently co-preparing for publication a 270-page German manuscript by Kazimierz Twardowski, Logik (1894/5) and a book titled On the History of Facts. She is also establishing a new extensive, interdisciplinary project on the history of mereology, and co-operating with several partners in and outside academia to set up a new form of virtual research environment (Bernard Bolzano Portal), as well as a new empirically-driven research methodology in philosophy assisted by novel computational methods (Phil@scale) involving state-of-the-art computer generated visualization techniques (Mapping Philosophy). In 2010 she became a member of the Young Academy of the Royal Academy of Sciences of the Netherlands (KNAW), and she will be a member of its board in 2011-2013. Her activity within the Global Young Academy mostly centers on topics such as science and society, open access and sustainability of research.