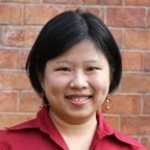 Regina C. So received her BS degree in Chemistry from De La Salle University in Manila, Philippines in 1996. She joined Professor Amy R. HowellÕs group at the University of Connecticut in 1998. Her graduate work at the University of Connecticut focused on the synthesis of sphinganine-containing glycosphingolipids. Before she finished graduate school, she also worked for a few months at the Department of Chemical Development in Boehringer Ingelheim Pharmaceuticals with Dr. Carl A. Busacca on asymmetric catalysis. After obtaining her PhD degree in 2003, she joined Professor Mukund P. SibiÕs group as a postdoctoral research associate where she worked on the synthesis of P,N ligands and their application in asymmetric catalysis. Currently, she is an Associate Professor and Chair of the department of Chemistry at Ateneo de Manila University, Philippines. Her research interests include the preparation of functional and reactive polymers and molecularly imprinted polymers for the detection of diseases like Tuberculosis.