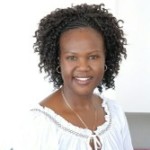 Council for Scientific and Industrial Research

Dr Patience Mthunzi (OMB) holds a PhD (2010) in Physics(Biophotonics – Optical Tweezers Area) from the University of St.Andrews, Scotland, UK. She started employment with theNational Laser Centre (NLC) in the Council for Scientific andIndustrial Research (CSIR) in the Biophotonics group in October2004. During 2010 she set up a fully equipped photonics lab forskill transfer and promoting novel optical techniques within SouthAfrica. She is currently a senior scientist researcher at the NLCin the Biophotonics group, leading single cell and/or moleculeprojects. She has published popular science and peer reviewedconference proceedings and journal articles (some invited). Shealso serves as a reviewer for the journal of Biomedical Optics, anexternal moderator and member of the postgraduate committeeat the University of Pretoria as well as the University of the Western Cape and is a member of CSIR’s HIV/AIDS committee.

In 2010, she received two Best PhD Student Awards from CSIR and NLC respectively. During September 2011, she was selected among hundreds of applicants, to attend and participate in the IAP/World Economic Forum's "Summer Davos" conference in Dalian, China. Only four outstanding Young Scientists got selected by the Academy of Science of South Africa (ASSAf) to represent South Africa for this global meeting. In April 2012, she was bestowed the Order of Mapungubwe in Bronze for her contribution in Biochemistry and Biophotonics both locally and internationally by President J. G. Zuma making her the youngest recipient of such an honour. During October 2012 she became an inductee of the South African Young Academy of Science (SAYAS) which is a merit based andprestigious appointment for leading researchers under the age of 40. Following serving as an executive committee member, she currently serves as a co-chair of SAYAS. At the beginning ofNovember 2012, she was selected as a repertoire by the Department of Science and Technology (DST) to represent South Africa’s (SA) young scientist and propose recommendations to the director general on issues surrounding SA – Europe (EU) Science and Technology cooperation discussed in the SA-EU Workshop organized by the DST. In December 2012, she was listed as one of the “20 Youngest Power Women in Africa 2012” in the Alexander Forbes Magazine. During 2013 she became a reviewer for grant applications at the National Research Foundation (NRF), an Advisory Board Member of the ESASTAP Plus Programme for Strengthening Technology, Research and Innovation Cooperation between Europe and South Africa and was awarded SA’s Most Influential Women in Business and Government Award by CEO Communications. Her current activities includeestablishing Biophotonics as a popular field of research in SA, raising public awareness on science and technology as well as voluntary youth counselling in her community.