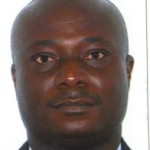 Dr. Ofomaja Augustine Enakpodia was born on the 21st of September 1969, in Warri Nigeria. He obtained a Bachelor of Science (Hons) degree anda Masters degree in Industrial Chemistry both from the University of Benin, Benin City, Nigeria. He received a Doctor of Technology degree inChemistry from the Vaal University of Technology, South Africa in 2009. Dr. Ofomaja is a Lecturer at the University of Benin and his researchinterest is in the area of Physical environmental chemistry. His focus is in the development and modification of natural materials as adsorbentsfor water and wastewater purification and also in industrial catalysis. He has published over 30 articles in ISI peer reviewed journals and servesas member of reviewer committee for several high impact factor journals in the area of waste and water treatment and chemical engineering. Hispublications have received over 200 citations in scopus since 2005 and he has contributed to several books for the teaching of chemistry in hishome university. He is nominated for the 2010 Editions of the Marquis Whos Who in the World and the 2000 Outstanding Intellectuals of the 21stCentury 2010. He is currently a Post-Doctoral fellow at the Centre for Materials and Process Synthesis (COMPS), Department of Chemical and Metallurgicalengineering, University of the Witwatersrand Johannesburg South Africa. Dr. Ofomaja is married to Bridget and has two sons, Benjamin and Samuel.