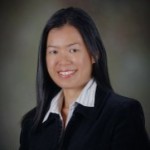 Dr. Normi Mohd Yahaya was the first Malaysian to earn a PhD at the age of 27 from Institute of Physical and Chemical Research (RIKEN), Saitama, Japan and Universiti Sains Malaysia under RIKEN-USM Asia Joint Graduate School Program. She specialized in creating evolved enzymes for biodegradable plastics production in microbes in RIKEN’s Laboratory of Polymer Chemistry under the supervision of Prof. Yoshiharu Doi. Love to seek and try new frontiers in science, she later became the first Malaysian to embark on protein NMR research during her postdoctoral experience in Institut Polytechnique de Lorraine, Nancy University, France in 2008. Having specializations in protein engineering and NMR structural biology, her current research interests involve fundamental research of investigating the functions, structures and potentials of hypothetical proteins in microbes. She previously worked in the School of Biological Sciences, Universiti Sains Malaysia as a senior lecturer for 5 years from 2006-2011 and subsequently joined the Department of Cell and Molecular Biology, Universiti Putra Malaysia in year 2012. She is a member of the Malaysian Society for Microbiology, UK Biochemical Society and American Biochemical Society. She holds various research grants from the Ministry of Higher Education and Ministry of Science, Technology and Innovation as well as from private bodies such as the Malaysian Toray Science Foundation. She has published her work in reputable journals and has won various awards and recognitions such as being selected as one of Malaysia’s young scientists to attend the 2010 Interdisciplinary Lindau Meeting of Young Scientists with Nobel Laureates and the Young Scholar Award by the Chemical Societies of the Pacific Basin. She is also involved in society awareness program such as inculcating the importance of biotechnology to school children under the Ministry of Science, Technology and Innovation’s Biotechnology Promotion Program.