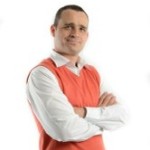 Daniel Esser was born in Johannesburg, South Africa, on February 22, 1978. He obtained is Doctorate of Engineering in Photonics from Heriot-Watt University in Edinburgh at the end of 2010 while working full-time at the CSIR National Laser Centre since 2004. He joined Heriot-Watt in 2013 as Professor in Laser Device Physics and Engineering. He is married to Professor Irene-marié Esser and they have two sons.

Prof Esser has achieved excellent research accomplishments through his focussed research on diode-pumped solid-state lasers and has produced journal papers and invited international conference papers, many of which have been cited by international researchers. His research background includes key demonstrations of new laser systems which could be applied to defence, remote sensing and industrial processes. In addition to his publication outputs, he was also co-author and principle investigator for a number of technology demonstrators developed during industry-focussed research projects.

He has been the recipient of a large number of awards and grants when he was at the CSIR National Laser Centre in Pretoria, South Africa while he also played an active role in the Photonics community of South Africa. In 2011 he was invited by the IAP to participate in the Annual Meeting of the New Champions in Dalian in September 2011 as a Young Scientist.

At Heriot-Watt Univeristy in Edinburgh, Scotland, he is a member of the Management Group of the EPSRC Centre for Innovative Manufacturing in Laser-based Production Processes and is responsible for promoting new laser technology in the UK manufacturing industry. Prof Daniel Esser has a relentless passion to see new technological developments in diode-pumped solid-state lasers to be of great benefit to mankind.