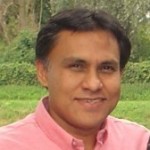 Dr. Jorge A. Huete-Pérez is the founder and director of the Molecular Biology Center at the University of Central America. He received his Ph.D. in Biological Sciences/Biochemistry through a joint program at the University of Sao Paulo, School of Medicine, Brazil, and the University of California San Francisco School of Medicine.Dr. Huete has received numerous awards from diverse organizations including the WHO, McArthur Foundation, CAPES International Science Fellowships, Rockefeller Foundation, Sandler Center, and UCSF. He also won a Pew Latin American Fellowship for postdoctoral research in molecular parasitology at the University of California UCSF (1996-1998).In 1999, he returned to Nicaragua to build a solid foundation for science in his homeland, at which time he founded the MBC-UCA. For the past ten years, Dr. Huete has been the Director and Principal Investigator of the MBC.In 2001, Dr. Huete participated in the STI Program at the Center for International Development, Kennedy School of Government, Harvard University for one year, after which time he returned to his research in Nicaragua. In 2004 he spent a sabbatical year as a Research Fellow at the Sandler Molecular Parasitology Center of UCSF.Dr. Huete is Director of Research and Social Outreach at the University of Central America, Managua. He is a consultant to numerous governmental and non-governmental organizations, including the Economic Commission for Latin America and the Caribbean (CEPAL-ECLAC), the Nicaraguan Counsel on Science and Technology, and the office of the Vice President of Nicaragua. His current research includes molecular parasitology, forensic DNA typing and bioprospecting for industrial enzymes. He is an outspoken advocate for improving science education and the appropriate use of biotechnology for development. Dr. Huete is Associate Editor of the international journal PLOS Neglected Tropical Diseases. In 2009 he became the founding President of the Nicaraguan Academy of Sciences.