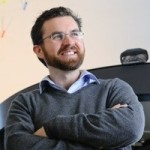 Jeremy O’Brien is professor of physics and electrical engineering at the University of Bristol and Director of the Centre for Quantum Photonics (CQP) (www.phy.bris.ac.uk/groups/cqp). He received his Ph.D. in physics from the University of New South Wales in 2002 for experimental work on correlated and confined electrons in organic conductors, superconductors and semiconductor nanostructures, as well as progress towards the fabrication of phosphorus in a silicon quantum computer. As a research fellow at the University of Queensland (2001Ð2006) he worked on quantum optics and quantum information science with single photons. CQP’s efforts are focused on the fundamental and applied quantum mechanics at the heart of quantum information science and technology, ranging from prototypes for scalable quantum computing to generalized quantum measurements, quantum control, and quantum metrology.