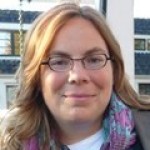 Bettina Speckmann heads the Applied Geometric Algorithms (AGA) group at the Department of Mathematics and Computer Science of TU Eindhoven (the Netherlands). AGA (https://www.win.tue.nl/aga/) mainly focuses on geometric algorithms for spatial data and applications of geometric algorithms in the areas of GIScience and Smart Mobility (including Automated Cartography, Geo-Visualization, and Moving Object Analysis), Visual Analytics, Mobile Agents, and e-Humanities. The group frequently combines the rigorous methods from algorithmic research areas such as computational geometry – which give performance guarantees with respect to both the quality of solutions and the running time of algorithms – with efficient engineering to achieve results of both theoretical and practical significance.

Bettina received her PhD from the University of British Columbia (Canada) in 2001. Afterwards she spent two years as a postdoc at the Institute for Theoretical Computer Science of ETH Zurich (Switzerland) before joining TU Eindhoven in 2003 as assistant professor. She was promoted to associated professor in 2008 and to full professor in 2012. Bettina was a member of both the Young Academy of the Royal Netherlands Academy of Arts and Sciences (2010-2015) and of the Global Young Academy (2011-2016). In 2011 she won the first Netherlands Prize for ICT Research. Bettina is both an NWO VIDI (2007) and an NWO VICI (2013) laureate. She served as PC (co-)chair of several high-ranking international conferences: the 19th International Symposium on Graph Drawing (2011), the 42nd International Colloquium on Automata, Languages, and Programming -- Track A (2015), and the 34th International Symposium on Computational Geometry (2018). Since 2018 Bettina is a member of the Computational Geometry Steering Committee.