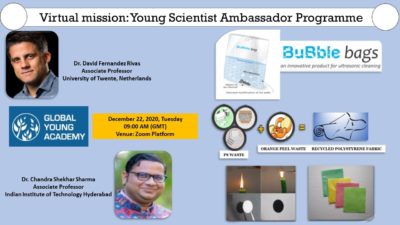 The GYA Young Scientist Ambassador Programme (YSAP) promotes the efforts by GYA members to bridge the international scientific gap by facilitating cultural, scientific, intellectual, or educational interactions. The ambassadorships are non-traditional; that is, interactions occur between two countries that are at different stages of scientific development, or between two countries that historically have had minimal scientific contact. The YSAP organises and funds missions wherein GYA members travel between low/middle-income countries and high-income countries, transferring expertise and knowledge and otherwise increasing engagement between nations of different scientific development. However due to the COVID-19 pandemic, these missions were organised on virtual platforms in 2020.

In December 2020, YSAP co-leads Chandra Shekhar Sharma (Indian Institute of Technology (IIT) Hyderabad, India) and David Fernandez Rivas (University of Twente, Netherlands) conduct a tutorial and experiment with ultrasound jointly with both their teams at the “Creative & Advanced Research Based On Nanomaterials (CARBON)” Lab at IIT Hyderabad and the Mesoscale Chemical Systems Group at the University of Twente, Netherlands. A similar mission was organised in November 2020 between GYA members Pradeep Kumar (University of the Witwatersrand, South Africa) and Filippo Rossi (Politecnico di Milano, Italy).

Chandra opened the virtual session with a brief presentation about IIT Hyderabad and the various research activities being carried out there. This was followed by a presentation from David, introducing some of the state-of-the-art research activities at their lab. Online demonstration of a few experiments followed. David’s group demonstrated ‘bubble bags’, which are new, innovative types of containers for use in ultrasonic baths, and have been developed in his lab. The insides of these bags have been modified with a specific pattern in order to promote cleaning. This patented modification generates a lot more microbubbles, which leads to better and faster cleaning of objects inside the bubble bag.

The CARBON Lab team then demonstrated the use of candle soot nanocarbon for developing next-generation energy storage devices. An innovative way to recycle the polystyrene plastic waste using citrus peel waste was also demonstrated for oil spills remediation. Students from both countries then exchanged their research ideas and explored the possibility to initiate some joint research activities in the near future through this virtual mission.

A short summary of the YSAP virtual mission is available on YouTube here.