It is no secret that chemistry has played a vital role in human civilization, and in today’s modern society, chemistry is equally important in tackling global challenges. Its contribution to the achievement of the 17 Sustainable Development Goals set by the United Nations General Assembly in 2015 for the year 2030 is highly anticipated. Concurring with the International Year of the Periodic Table and the centenary of the International Union of Pure and Applied Chemistry (IUPAC), IUPAC celebrated its General Assembly from 5-12 July 2019 in Paris, where new and upcoming challenges of chemistry around the world for the next 100 years were debated.

During elections held at the IUPAC General Assembly, GYA alumnus, Javier García (Spain), was elected to be president of this organization for the biennium 2022-2023. Until that date, he will hold the position of vice-president. Javier García was previously a member of the Bureau of IUPAC and vice-president of its Division of Inorganic Chemistry. For Javier García, “being at the forefront of an organization of these dimensions and projection is, as well as an honor, a great opportunity to place young scientists at leadership positions of international organizations”. Javier García takes over from Chris Brett, professor of physical chemistry at the University of Coimbra in Portugal. In the words of the Javier García “now that the International Union of Pure and Applied Chemistry enters its second centenary, we look to the future committed to contributing to the Sustainable Development Goals and to providing solutions to our most pressing challenges”.

GYA alumna Ghada Bassioni was elected to serve on the IUPAC Bureau. Congratulations to Ghada and Javier! 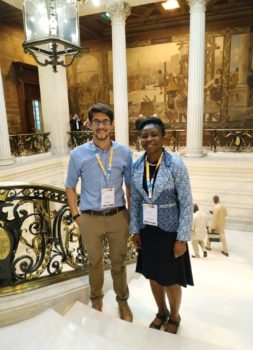 About the International Union of Pure and Applied Chemistry (IUPAC)

The IUPAC was founded in 1919 by chemists from academia and industry. Over the last 100 hundred years, the Union has created the common language of chemistry, standards, verified data, best practices in chemistry and promoted the education of this discipline and collaboration in the university and the chemical industry. The IUPAC is the world authority when it comes to recognizing and naming the chemical elements and ordering them in the periodic table.

The Union sponsors international meetings at the highest level and funds projects around the world. During the Cold War, the IUPAC played a very important role in maintaining the scientific dialogue between scientists of different nationalities. Currently, the Union is looking at its new centenary with the focus on the Sustainable Development Goals, the application of artificial intelligence to chemistry and the commitment to diversity.