On 26 October 2019, the First World Young Scientist Summit was held in Wenzhou, China. The meeting was unprecedented in China for its focus on young researchers and scholars, and covered all possible academic areas. Attendees came from over 70 countries, and very much resembled the GYA in both spirit and agenda.

The aspiration of the hosts, Dr. Meng WANG, President of the YES Network, and GYA member Alexander (Sasha) Kagansky (Russia), was to include young scientists in decision making, and invite them to take responsibility for reaching the United Nations Sustainable Development Goals (SDSs) in China, Asia, and worldwide.

This World Young Scientist Summit was supported by the highest levels of politicians. Chinese President Xi Jinping sent a congratulatory letter to the Summit, with a key message that China is very pleased to support young scientists. (The letter is summarised here in the China Daily). Nobel Prize laureates, the Vice President of the Chinese Academy of Science and Technology (CAST), high-level authorities from the Chinese Academy of Sciences (CAS), and ranking members of local governments and prominent businessmen were all invited to the Summit.

Due to the incredible and positive energy of Dr. Wang, who was the key organizer of the event – China is now close to setting up their own Young Academy, with mentoring support by the GYA.

GYA former co-chair Moritz Riede (UK, below) was the host of a Keynote session introducing the Nobel Prize laureates at the opening ceremony of the event. 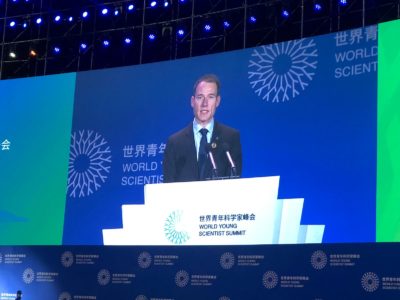 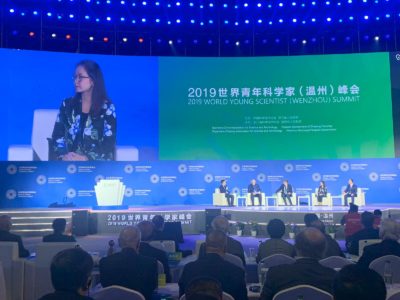 Sasha Kagansky´s (below, right) involvement included moderating sessions and providing a keynote speech at the young scientists’ round table, and curating the declaration of young scientists, which was the main outcome of the summit. The declaration focused on the future roles for young scientists in the SDGs and responsible research in collaboration across nations and disciplines. 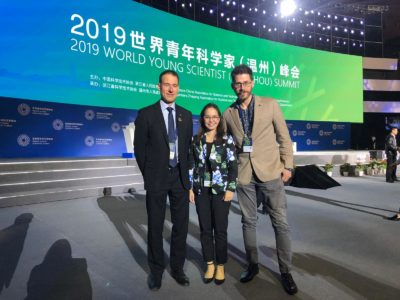