We were deeply saddened by the death of Alexander “Sasha” Kagansky in December 2020, and join his family and friends in grieving this tragic loss. Sasha was a GYA member from 2015-2020, and in this time he made countless meaningful connections and initiated and collaborated on many inspiring projects.

info@globalyoungacademy.net
Alumni of the GYA
Member 2015 - 2020

Center for Genomic and Regenerative Medicine; School of Biomedicine

Alexander (Sasha) Kagansky was a Director of a Center for Genomic and Regenerative Medicine, School of Biomedicine at the Far Eastern Federal University in Vladivostok, Russia. Research in the centre is aimed at the understanding of the molecular basis of the cell fate in normal cells and disease, drug discovery and at finding ways to cure cancer and regenerate tissues, which will be crucial for the future of molecular medicine. In his studies he combined genetics, synthetic biology, biochemistry and proteomics.  Before he was a Chancelor’s Fellow at the MRC Human Genetics Unit, Institute of Genetics and Molecular Medicine, University of Edinburgh, and led the research at the Synthetic Epigenetics Lab. In 2005 – 2012 Sasha worked at the Wellcome Trust Centre for Cell Biology, University of Edinburgh, as a postdoctoral research associate (Robin Allshire lab, until 2010) and then as senior research associate (Bill Earnshaw lab). He received his Ph.D. in Molecular Biology in 2004 after spending 3 years in National Institutes of Health in USA. In 1998 he got his MS in Biophysics from from St.Petersburg State Polytechnical University in Russia. Apart from the research in the lab, Sasha Kagansky is regularly organizing public engagement of science activities for different target group: artists, primary school kids, and general public, in different parts of the world, which result in new collaborations between scientists and artists. In 1991 he was a first Russian delegate to the European Youth Parliament. He is also a member of Young Academy of Scotland. 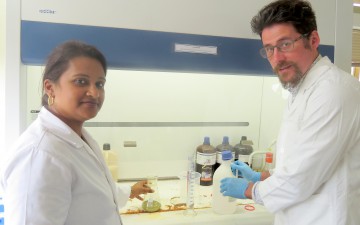