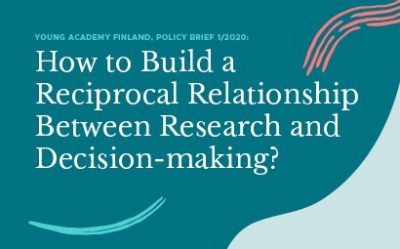 The Young Academy Finland (YAF) have recently finished their “Young Researchers as Knowledge Brokers” project that aimed at developing new approaches for organising the coordination of knowledge exchange on different science-policy interfaces. The project’s main findings are gathered in the academy’s first-ever policy brief titled ”How to Build a Reciprocal Relationship Between Research and Decision-making?”.

The YAF’s one-year “Young Researchers as Knowledge Brokers” project started with a survey among the European Young Academies in 2019 in order to collect landscape information on their activities on the national and European science-policy interfaces. After this four discussion workshops on different themes and targeted to various stakeholders were organised. The point of these discussion workshops was to find and test novel forms of activities for different knowledge needs and for different stakeholder groups. Finally, the YAF collected all the findings together and published a policy brief document that is available also in English.

The policy brief is targeted especially for use by the Science Advice Initiative of Finland, Sofi, but its messages are useful for anyone interested in the relationship between science and decision-making. Sofi is a national-level project on building a next-generation science advice system in Finland and is coordinated by the Finnish Academy of Science and Letters.

When science advice mechanisms are being created or used, one should pay attention to the type of expertise that is supported, whose expertise is considered valid, and how the science advice mechanisms are institutionalized. No matter how distant science advisers might stay from the decision-making in order to draw a clear boundary between scientific knowledge and decision-making, the aforementioned points influence the framing of the advice that is given. During the project, the YAF focused particularly on finding such mechanisms that would allow researchers interactive and regular access to the political environments as opposed to so-called linear mechanisms that support one-sided information flow.

In the policy brief, the YAF highlights that the mechanisms of science advice can be designed such that instead of just gathering knowledge and transferring knowledge they are also used to promote scientific and political literacy and multilateral understanding and trust. Unfortunately, an easy, overarching solution consisting of a single template or mechanism does not exist. However, the project finds that a reciprocal relationship between science and decision-making promotes knowledge-informed decision-making. There are many forms of activities available for supporting reciprocal relatonships. Further, early-career researchers are most easily allowed a voice through informal, diverse, and interactive forms of activity.

Main messages from the Young Academy Finland Policy Brief 1/2020 are:

Read more about the findings from the survey of European Young Academies’ science advice activities here.