We should not wait for the Sun and the Moon to align before executing anything.  Just do it!

Dr. Piyawattanametha received a Ph.D. degree in Electrical Engineering from the University of California, Los Angeles, USA in 2004. From 2005 to 2009, he was with the Bio-X Program, Stanford University, Stanford, CA, USA as a senior scientist and later become a research associate in 2010. From 2010-2014, he worked as a senior research scientist at the National Electronics and Computer Technology Center, Thailand. Currently, he is with the King Mongkut’s Institute of Technology Ladkrabang, Ladkrabang, Thailand as the Director of Advanced Imaging Research (AIR) Center. He has authored or co-authored over 200 peer-reviewed publications, has contributed 7 book chapters and 5 patents in areas of Microelectromechanical Systems (MEMS), Photonics, and Biomedical Imaging. His h-index is 30.  He is currently serving a conference chair for the Society of Photo-Optical Instrumentation Engineers (SPIE) in MOEMS and Miniaturized Systems XVIII of The Photonics West Conference, California, USA.  In addition, he served as organizing/program chairs for many International Conferences such as the Institute of Electrical and Electronics Engineers (IEEE) Optical MEMS and Nanophotonics, IEEE CYBER Technology in Automation, Control, and Intelligent Systems, IEEE Nanoelectromechanical Systems (NEMS), and IEEE Nanomedicine (NANOMED). He gave over 70 keynote or invited talks at prestigious meetings around the world including the World Economic Forum (WEF), the World Health Summit (WHS), and the World Science Forum (WSF). In 2010, he co-founded and served as an executive member (in 2012) of the Global Young Academy (GYA) based in Berlin, Germany. The GYA represents the voice of young scientists around the world. In 2011, he received the European Union Erasmus Mundus scholarship. In 2013, he was selected by the WEF, Geneva, Switzerland to be one of the 40 top young scientists under the age of 40 who plays a transformation role in integrating scientific knowledge and technological innovation to improve the state of the world. In 2014, he was selected to receive the prestigious Fraunhofer-Bessel Research Award from the Alexander von Humboldt Foundation, Berlin, Germany for his pioneering work in light microendoscopy techniques. He is the first Thai scientist to receive this prestigious award. In 2015, he was awarded the Newton Fund Researcher Links from the British Council, the United Kingdom for his novel optical imaging technique for early cancer detection. In 2017, he was selected to be a fellow in Leaders in Innovation Fellowships (LIF) from The Royal Academy of Engineering, London, United Kingdom. He has been appointed as an Adjunct Professor, Institute for Quantitative Health Sciences & Engineering (IQ), Michigan State University, Michigan, USA since 2018.  In the same year, he was invited to participate as an expert in the Governance of Dual Use Research in the Life Sciences Workshop organized by The National Academies of Sciences, Washington, DC, USA, and InterAcademy Partnership, Trieste, Italy. In 2018, he received a Gold Medal Award from the 46th International Exhibition of Inventions Geneva, Geneva, Switzerland. In 2019, he was invited as a biomedical engineering expert to join the Bioengineering Horizon Scan Workshop from the Centre for the Study Existential Risk (CSER), University of Cambridge, UK to help identify disruptions and emerging issues in Bioengineering. Since 2019, he has been serving as a Technical Advisory Committee at both the National Cancer Institute and the Institute of Medical Research & Technology Assessment where both Institutes are under the Ministry of Public Health, Thailand. During the COVID-19 pandemic, he helped lead a task force under the Ministry of Public Health, Thailand in expediting medical innovation to public use.

• Awarded the Newton Fund Researcher Links in 2015 from the British Council, United Kingdom 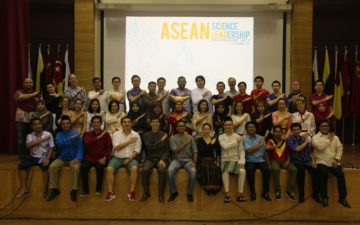 Beyond Boundaries: A global message from young scientists on COVID-19