Executive Committee member Sandra Lopez-Verges (Panama) represented the GYA recently at the 4th National Meeting of the Affiliate Members of the Brazilian Academy of Sciences, 24-26 June in Fortaleza, Brazil.

Alexander Birbrair (Brazil), a new GYA member and a member of the Brazilian Young Affiliates, was also at the meeting.

The focus of their meeting was on science communication to funders, to society and to policymakers.

As most of the Brazilian GYA members are from the social sciences, and the Brazilian Young Affilates are concentrated in maths, physics, chemistry and biological sciences, no further GYA members were present. The importance of interaction between all academic fields was duly discussed and Sandra suggested that the Young Affiliates look into engaging with the other Academies in Brazil as well.

The Brazilian Young Affiliates were very interested to hear about the activities of the GYA working groups, especially on Open Science, Climate Change, and the interaction between science and art. They were also interested to learn that the GYA call for membership from 2020 is now open. 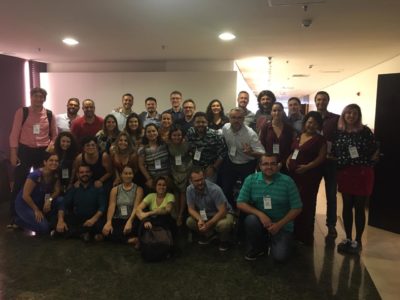 The participants were also interested to learn about the GYA’s large projects, in particular the idea for participating in the upcoming GloSYS Latin America and Caribbean countries survey. The GYA’s Science Leadership Programmes (SLP) were also discussed, and the possibility of conducting an SLP with a specific theme, for example on the Sustainable Development Goals. Trainees could then replicate lessons learned in their countries.