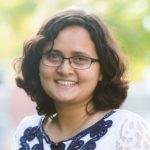 Nafisa Tanjeem (she/her) is an Associate Professor in the Department of Interdisciplinary Studies at Worcester State University in Massachusetts, United States.

Nafisa is currently working on finishing her book manuscript that examines transnational labor activism and activist discourses developed in relation to the deadliest garment industrial disaster in human history, the 2013 collapse of Rana Plaza – a factory building housing five garment factories in Savar, Bangladesh, and continued until the global COVID-19 pandemic. The project examines the gendered, racialized, classed, and (trans)national trajectory of labor organizing around the Accord, the Alliance, and the COVID-19 pandemic proposing diverging concepts of safety, security, and labor rights, and the challenges that arise when these concepts clash in various local and global, physical and virtual organizing spaces.

Nafisa has been actively involved in community organizing and social justice activism. She is an organizer of the Meye (“Woman” in Bangla) network, which is a voluntary, grassroots, and organic network advocating for women’s solidarity and leadership in Bangladesh. In the past, she was a co-chief steward of the core faculty union of Lesley University, which was a part of SEIU Local 509. She organized with the Rutgers University chapter of United Students Against Sweatshops (USAS) on the garment worker solidarity campaign in New Jersey, the United States. She also worked as Community Organizer and Events Coordinator with the Council of Agencies Serving South Asians (CASSA) on poverty reduction, gender equity, and youth engagement among South Asian immigrant communities in Toronto, Canada. Nafisa recognizes the value of public scholarship and is a contributor to many American and international platforms, such as Common Dreams, the Daily Star, New Age, Thotkata, and Bama.