In December 2022, more than 15 GYA members and alumni served as panelists and speakers as scientists from around the world gathered at the World Science Forum (WSF) in Cape Town, South Africa, to focus on the social and economic relevance, influence and responsibilities of science.

As members of the WSF Steering Committee, the GYA plays a vital role in planning and carrying-out the WSF, as illustrated by the Declaration of the Tenth World Science Forum, which explicitly recognizes the crucial role of early-career researchers (ECRs) in advancing science, and goes on to call for enhanced support for the GYA and National Young Academies.

Prosper noted that “It was a great opportunity having so many GYA members attending the 2022 WSF, and having the opportunity to deliver opening remarks along with the heads of WSF partner organizations. The WSF 2022 was inclusive and special in the sense that it was the very first one to take place on African soil, and to give many ECRs, including GYA members, the opportunity to be invited speakers in most of the main panels of the Forum. Further, this was the very first time for a GYA Co-chair to speak at the Opening Ceremony of the WSF since its inception in 1999. It was also a great opportunity to inform a large number of distinguished WSF delegates about the GYA’s mission of ‘science for all, science for the future’, and how it directly related to the WSF 2022 theme ‘science for social justice’.”

GYA Co-Chair Priscilla Kolibea Mante (Kwame Nkrumah University of Science and Technology, Ghana) added that “The WSF 2022 brought together the science community, providing one of the rarest networking opportunities for young scientists. Discussions on science diplomacy and social justice reaffirmed the need for international science collaboration, diversity, and inclusion in finding solutions to the world’s challenges. It was fulfilling to see the crucial role of young scientists in the advancement of societies being recognized.”

In her remarks during the Opening Ceremony, Roula provided powerful food for thought: “If we, as scientists, don’t listen, we might try to solve problems that don’t exist and waste resources in the wrong places.”

You can read her full speech here.

Encieh reported that “This WSF was a completely different experience than the one in 2017 when for the first time I got a chance to participate. This time I had a chance to be a speaker in two sessions: ‘A Global Approach to Ending Sexual Harassment in STEM’ and ‘Building Bridges for ECRs’, both of which are my main concerns. I am happy that I could be the voice of women in STEM and emphasize the leadership skills which are essential for ECRs. Also, becoming an ISC Fellow (read that article here), was a great achievement that made this WSF more memorable.”

Another Thematic session speaker, GYA member Saja Al Zoubi (University of Oxford, United Kingdom), used her talk to highlight the GYA’s At-risk Scholars Innitiative and its goal of protecting those scholars who had to flee their countries, as well as the mission of the GYA itself.

Saja commented, “I spoke of the role of displaced, refugee and at-risk scholars’ in creating and adding value to international science and development, and called for depoliticizing those scholars from international political measures, especially sanctions and bans. In parallel, I highlighted the importance of enhancing the programs, initiatives and organizations that protect those scholars to link these brains with prestigious universities and research centers, with those sources that might help them achieve these vital roles.”

Clarissa, during her remarks at the Closing Ceremony, added some vital insights that resonated with the audience, namely that “We need to address short political timescales, corruption, a lack of ethics education, diversity and inclusion & capacity to grasp systemic risk to really harness science for social justice.”

With so many GYA members, alumni and Executive Committee members having participated in the WSF 2022, it is challenging to adequately portray all the highlights or include all the speakers names in one news item.

Below we provide some texts and links to help provide further details.

Further highlights from the WSF 2022

The WSF kickstarted with an inspiring visit for ECRs to the District 6 museum during a city tour of Cape Town. Museum staff took the researchers through the past and current social injustices members of the community face in Cape Town. Using novel techniques of land surveying, science is applied for social justice to identify the location of previous homes and businesses of persons who were wrongfully evicted from their land. ECRs from all over the world had the opportunity to connect and share thoughts and opinions around science and social justice with each other as well as museum staff. It was an honour to be reminded of the importance of recognizing social injustices and a call to avoid repeating the same mistakes in the future.

The GYA hosed an exhibition booth together with the South African Young Academy of Science (SAYAS). The booth was located in the main exhibition hall, where GYA members and alumni met and connected with other ECRs. 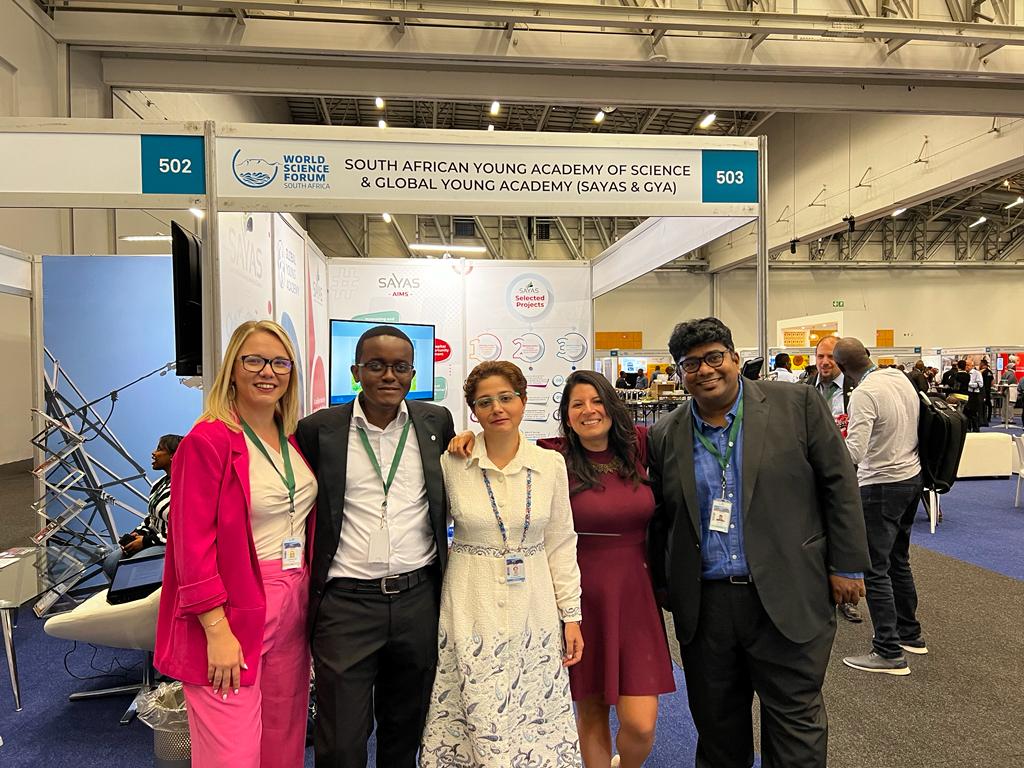 Links to WSF-themed stories from the Cape Times