From 8-10 May 2019, the European Federation of Academies of Sciences and Humanities (ALLEA) held its 25th anniversary conference in Bern, Switzerland. Three representatives of the GYA, Co-Chairs Connie Nshemereirwe (Uganda) and Koen Vermeir (France) and Executive Committee member Michael Saliba (Switzerland) discussed this year’s GYA’s International Conference of Young Scientists on ‘Re-Enlightenment? Truth, Reason and Science in a Global World’ during a panel discussion organized by the GYA.

Koen introduced the theme and stressed the importance of rethinking the relationship between science, policy and the public. He argued that the GYA has a role to play: ‘We are trying out new things: young scientists find new ways to engage globally and are willing to take risks.’

The GYA panelists discussed the values of the Enlightenment in today’s society, in digital transformation, and in a post-truth world. They also discussed how society can embrace the universality of science while valuing local and cultural differences. According to Connie, ‘We need more diverse input in science and policy discussions if we are going to arrive at a comprehensive understanding of the nature of challenges that we are grappling with.’

The panel also discussed how scientists should interpret their role in an environment that seems to be moving away from Enlightened values, yet still relies on scientists to solve the grand challenges of our time.

According to Michael, ‘Knowledge is now available at all of our fingertips, also in developing countries. This is a huge chance to unlock the human potential. Our generation of scientists has the unique opportunity to be part of this.’ 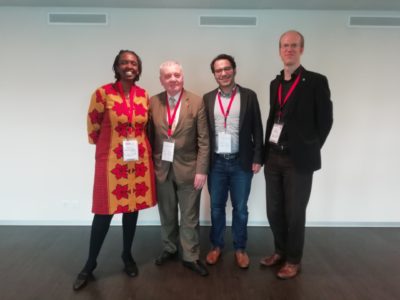 The interactive panel sparked a vivid discussion with the audience, and participants in the ALLEA meeting urged young scientists ‘to question the established ways’. The public also thought that young scientists were ideally placed for facilitating the interaction between science and the broader public and ‘to listen to their questions and concerns’.

The ALLEA 25th anniversary celebrations took place at the opening of the 2019 General Assembly on 8 May at the University of Bern. Christian Leumann, Rector of the University of Bern, gave a welcome address and Swiss Federal Councillor Guy Parmelin provided the opening address. Antonio Loprieno, President of ALLEA and of the Swiss Academies of Arts and Sciences, delivered a special address on the role of academies in European societies.

An anniversary keynote commemorating the 25 years of European academies’ cooperation and reflecting on the future of European research was provided by Jean-Eric Paquet, the European Commission Director-General for Research and Innovation.

More information, including videos of the speeches and panels, is available at the ALLEA website here.