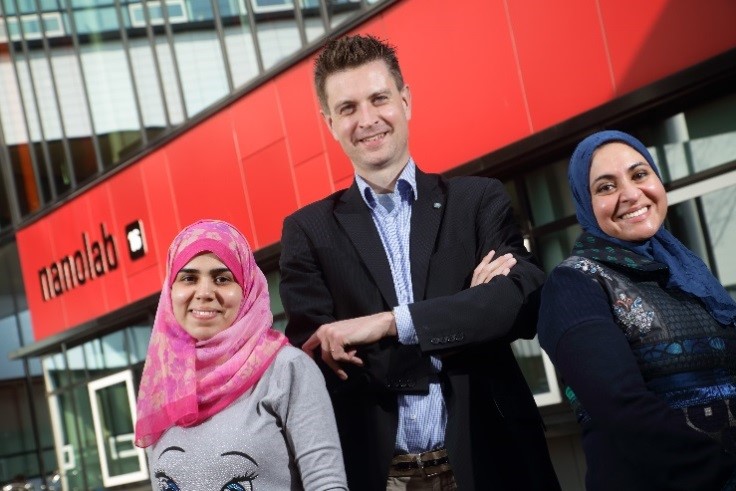 This activity is not currently / no longer active.

About the GYA North-South Interdisciplinary Grant

This grant scheme was initiated in 2014, aiming to foster collaboration across the lines that often separate researchers and limit possibilities. Specifically, this scheme facilitates the development of small-scale, innovative, curiosity-driven, blue-sky, exploratory research pilots or prototypes that unite researchers in low and middle-income countries and high-income countries and cross disciplinary boundaries.
The North-South Interdisciplinary Grant is awarded annually, and is meant to provide seed money to enable GYA members to prepare a proof of concept, prototype, or pilot research project with a view to securing larger external funding.

This interdisciplinary project aimed at the realization and electric/magnetic characterization of metallo-organic complexes in low-dimensional systems.

In this context, Ghada Bassioni and Wilfred van der Wiel officially co-supervised M.Sc. student Rehab Ibrahim Youssef. Rehab visited the University of Twente in April 2015 for one month. Prior to her visit, she had synthesized a number of metallo-organic complexes that were characterized partly in Germany and partly in Egypt by infra-red spectroscopy (IR), mass spectrometry (MS), nuclear magnetic resonance spectroscopy (NMR) as well as by vibrating sample magnetometry (VSM) in Twente. Several complexes have been further synthesized and are currently under chemical, electrical and manetic characterizartion. Ghada Bassioni also visited the University of Twente in April 2015, giving a seminar on the project and potential outcomes.

In addition to research, within the Young Scientists Ambassador’s framework, Bassioni and van der Wiel used their interdisciplinary project  to conduct an education outreach activity in Twente.

Research progress
The plan is to generate new thin films of complexes using different solvents that will be electrically and magnetically characterized. Compounds showing finite conductance will be incorporated in a confined geometry and measured.
In order to achieve this, several complexes have been synthesized under Bassioni’s supervision in Egypt by Rehab and in Germany during Bassioni’s guest professorship at the Technische Universitaet Muenchen. These samples were partly characterized there as by classical and modern characterization techniques that will allow illucidation of the actual structures of these complexes. Parallel to that, these samples were sent to van der Wiel’s group in October 2015, to be tested for their electric and magnetic behaviors.

Research started with this grant continued and has led to the publication: