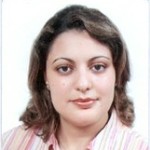 Dr Rym KEFI is a Senior lecturer in Pasteur Institute of Tunis. She obtained her bachelor degree with honours in Biology at the University of Tunis on June 2000. She was offered a scholarship to pursue a master degree in Molecular Anthropology in U600 INSERM in Marseille, France. Her Master thesis (June 2001) was focused on the study of ancient DNA obtained from Middle Age French skeletons with Hip dislocation. She continued her doctoral studies in the same laboratory where she worked on Mitochondrial DNA diversity in current and ancient Human populations (6.000 to 23.000 years BP) in North Africa. She also contributed to several other studies especially Mitochondrial DNA diversity in Cave Bear of Chauvet Cave.

She carried out her first post doctoral training (February 2005- January 2006) in UR088 in Research and development Institute (IRD) in France. She studied ancient DNA of paleoberbere skeletons (4.500 years) exhumed from archaeological site in Southern Tunisia.

In February 2006, she joined Pasteur Institute of Tunis. She is mainly involved in Research on human genetic disorders, genetic diversity in North Africa and genetic typing in forensic. She is co-coordinating a NEPAD/NABnet project on the genetic basis of type II Diabetes in five North African countries and a bilateral Tunisian-Moroccan partnership on Human orphan diseases and mitochondrial DNA diversity in Tunisia and Morocco.

Since January 2012, she is Co-Principal investigator of the European Project : on “the Genetic and environmental factors of insulin resistance syndrome and its long-term complications in immigrant Mediterranean populations (FP7- Proposal No 279171-1) and leader team of a second European Project on reinforcing IPT capacities in genomic medecine, non communicable diseases and international cooperation (FP7- Proposal No 295097).

Rym KEFI is also involved in training and teaching activities. She is an author/ co-author of more than 26 publications.