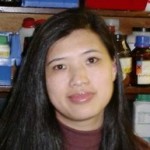 University College London and The Royal Institution of Great Britain

She held a prestigious Royal Society University Research Fellowship from 2005-2014. The fellowship is for outstanding scientists in the UK who are in the early stages of their research career and have the potential to become leaders in their field, the success rate of the application is 5%. She was appointed a full Professor of Nanomaterials at University College London before finishing her fellowship in 2013. The focus of her work has been exploiting the physical properties of Au, Ag and magnetic nanoparticles for biomedical application. She has been an invited speaker at over 130 institutes and scientific meetings and served on over 20 scientific committees for many major international conferences on Nanoparticles such as MRS, EMRS, MRS Singapore, American Chemical Society, Royal Society of Chemistry (RSC)-SCI UK Colloids 2011, 2014 and 2017. Her work has been funded by the Royal Society, Research Academy of Engineering (RAE), Engineering and Physical Sciences Research Council (EPSRC), Biotechnology and Biological Sciences Research Council (BBRSC), European Union, US Airforce, Medical Research Council, Welcome Trust and Northwest Cancer Research Fund.

In November 2007, I was paired with Mr Andrew Miller, Chair of the House of Commons Science and Technology Select Committee in the Royal Society MP-Scientist Pairing Scheme.
She was nominated by The Royal Society to represent it at the Interacademy Panel (IAP) conference of young leader in STI at the World Economic Forum's "Meeting of the New Champions 2008" in Tianjin, China, September 2008. She was invited to be a discussion leader in "The Next Wave for Nanotechnology" panel at the conference. From this meeting Global Young Academy (GYA) was founded, and Thanh was one of the founders.
She presented GYA at European Commission’s Joint Research Center (JRC) - EASAC (The European Academies Science Advisory Council) – GYA workshop to facilitate an interactive debate on creative and innovative approaches to address complex societal challenges in in Brussels, Belgium in July 2014.

In Nov 2015, she was invited as presentative of Vietnam Young Academy to The Global Young Academy (GYA), the Young Academy of Sweden (YAS) and the European Commission’s Directorate-General Joint Research Centre (JRC) are co-organising the Conference entitled 'Scientific Support Policy Making in Sustainable Development: Joining Forces' as part of the 2nd Worldwide meeting of Young.