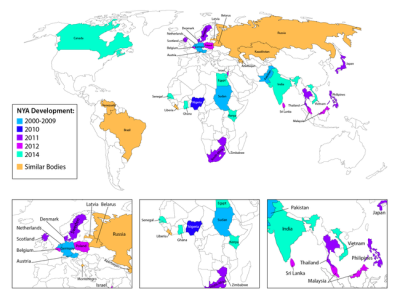 After eight months of consultation, the Indian National Science Academy (INSA) approved the establishment of the ‘Indian National Young Academy of Science (INYAS)’ on 20 December 2014.

Coming into existence in 2015, the newly founded academy will consist of about 100 members who will be inducted for five year terms and will be younger than forty years of age at the time of induction. After the establishment of election procedures, the first call for applications has already gone out to INSA Young Scientist awardees. INSA commited to provide core funding and office support for INYAS and optionally add additional funding for specific programs. Therewith the advisory committee chaired by GYA-alumnus Rajesh Gopakumar and including GYA-alumnus Ranjini Bandyopadhyay, as well as Anindita Bhadra, has reached its goal of establishing the Indian National Young Academy of Science (INYAS) as one of six initiatives of National Young Academies (NYA) founded in 2014 worldwide.

Retrospectively, the GYA was happy to see the thriving of these six initiatives that we have supported on their journey to NYA status. In the beginning of 2014, Kenya had started off by establishing the ‘Kenya National Young Academy of Science (KNYAS)’ during the Africa Young Academies Regional Conference in Nairobi, Kenya. It was followed by two other African countries, namely Ghana with the ‘Ghanaian Young Academy (GhYA)’ in May and Egypt with the ‘Egyptian Young Academy of Sciences (EYAS)’ in September 2014. In November 2014,the ‘College of New Scholars, Artists and Scientists of the Royal Society of Canada’ inaugurated its first cohort of 91 members. Moreover the ‘Vietnam Young Academy (VYA)’ was launched in November 2014 with the admission of 13 members and is currently drafting its constitution on the basis of the NYA blueprint developed by the GYA. Including India, these establishments made 2014 one of the most successful years of the young scientists movement.