Young Academies from all over Europe met in Amsterdam, the Netherlands, on 23-24 March 2018. The meeting, organised by the Dutch Young Academy, was the group’s largest gathering so far with more than 35 participants representing 17 young academies and academy initiatives. The GYA was represented by its Co-Chair Moritz Riede (UK), as well as members Eva Alisic (Australia) and Gergely Toldi (Hungary), and alumnus Marc Creus (Switzerland).

José van Dijck, President of the Royal Netherlands Academy of Arts and Sciences (KNAW), welcomed the participants to the meeting and labelled young academies of sciences “a brilliant idea” as their presence would keep members of senior science academies attuned to new perspectives.

Presentations by each young academy highlighted their latest activities, flagged up common issues of concern and discussed future inter-academy collaboration projects. It became apparent that a number of academies are engaged in activities in similar fields, e.g. at-risk-scholar initiatives, open science, the current state and career prospects of young scientists, engagement with the media or politics, science outreach activities to popularise science among school kids and the wider public, and concern over increasing challenges to academic freedom. Based on the projects presented, further possibilities for inter-academy collaboration were discussed.

A panel discussion on how young academies can work together in achieving the UN Sustainable Development Goals (SDGs) was also part of the meeting. Eva, who is a co-chair of the InterAcademy Partnership SDG project “Improving Scientific Input to Global Policymaking: Strategies for Attaining the Sustainable Development Goals” emphasised the great role that young academies can play as instigators and stimulators of science in national and regional arenas. As inherently interdisciplinary organisations they should also act to solve the knowledge questions inherent in the SDGs. She was joined on the panel by Professor Jeroen van den Hoven, Delft University, and Hugo von Meijenfeldt, SDG Coordinator for the Dutch Government. 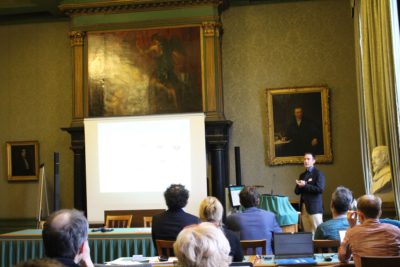