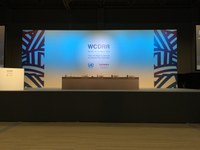 Eijiro Sumii was part of the Science and Technology Major Group. Major Groups are representing various societal stakeholders such as women, children and youth, NGOs or Science and Technology. These groups are eligible to engage in discussions with states, inter-governmental organizations and UN entities. At the WCDRR, a large number of organizations belonging to different Major Groups share their views in key aspects of disaster risk reduction, distribute information, and coordinate official statements and position papers. At one of the Plenary Meetings at WCDRR, the Science and 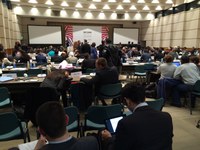 Technology Major Group made an official statement , which calls for strengthening the coordination of existing networks, promotion of risk informed decision making and support of the implementation of a new risk averse policy framework.

In the end of the conference, participants agreed on the Sendai Framework for Disaster Risk Reduction 2015-2030 and the Sendai Declaration, which both succeed the previous Hyogo Framework for Action. They include a five-point plan to be implemented by participating governments to effectively manage disaster risks which contributes to a sustainable development.

More Information about the WCDDR can be found here.