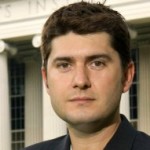 Professor of Inorganic Chemistry and the director of the Nanotechnology Molecular Laboratory at the University of Alicante, Spain. Published extensively in the areas of nanomaterials, catalysis and energy. His later books are “Nanotechnology for the Energy Challenge” (Wiley-VCH) and “The Chemical Element: Chemistry’s Contribution to our Global Future” (Wiley-VCH).

Vice-chair of the World Economic Forum General Assembly Council on Emerging Technologies and member of Bureau of the International Union for Pure and Applied Chemistry(IUPAC).

Javier has been recognized as a leader in nanotechnology and materials science. In 2005, Javier was awarded the Europa Medal, awarded annually to the outstanding European chemist under the age of 35, and he received the Silver Medal of the European Young Chemist Award in 2006. In 2007, Javier received the TR 35 Award from MIT’s Technology Review magazine, and in 2009 Javier was selected as a Young Global Leader by the World Economic Forum.